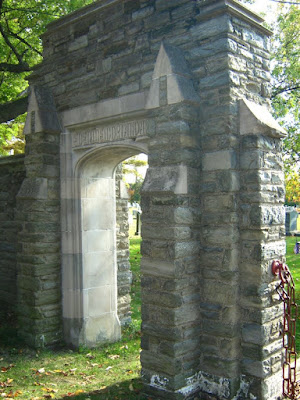 This is the gateway to Eden Cemetery located in Collingdale , Pa. It is the nation's oldest African American cemetery . During the past summer, acts of desecration and vandalism occured on nearly 200 tombstones. They were either knocked over, spray painted, or defaced in some manner.
Locals insist these were racially motivated acts, and local officials disagree. Their position is that these were just vandalism acts, which they condemn.
In either case, a ceremony was held at the cemetary today to honor our ancestors that are laid to rest there. A couple of the more notable interned there are Marian Anderson, Octavius Catto and William Sill.
There was an African drum presentaiton as well as reenactments from the "souls" of some of those laid to rest there. Very moving and powerful.
The whole purpose was to call attention to the atrocities that were committed there, and vow to never let it happen it again, through better community outreach.
Posted by UrbanPer$pectiV BLOG : at 9:30 PM