Many years ago when I began my Spiritual journey Seeking GOD / Jesus Christ of Nazareth , a former pastor , an Antiguan woman prophesied that my photography would be my ministry.
Admittedly, I didn't see at first "how" this was possible since I was mostly an event photographer. This includes birthdays weddings, and any event where a photographer is needed.
Over the past decade I have amassed a photography collection of personal shots ....... many now that I can use for the purpose of ministry.
But my Spiritual journey didn't start when I took up photography .  All of my Life I have had a Spiritual connection to GOD.  It wasn't until social media platforms became available that I could begin to tell my story .......

UrbanPerspectiv........ A digital/street ministry..... Yeshua Jesus Christ of Nazareth Peace Spirit Envoy I was Called 🔊 ALOUD in a man's voice and by Name in my home when I was a little boy of 7 or 8 years old... with 2 witnesses present that heard. This event rattled our nerves and was seldomly discussed if at all... for obvious reasons I have a podcast in development to discuss this event. There are several passages of Holy Scripture I will reference to back up my claim that it was indeed Him that Called my name out LOUD...in a thunderous man's voice! This is why I choose to testify to this in a podcast format vs social media where I'm limited by characters It is only Now as an older man ... that im beginning to testify to the hiphop commmunity etal (and all others) underground .... via social media that Yeshua is a "real" Being & how I came to know this..... GOD Lives! #Yehua #JesusChristOfNazareth #QuantumSciFi #Author #writer #thePiscesParadox #undergroundRR #hiphop #art #philly #Philadelphia #whyILovePhilly #FirmamentNő7 #WeAintFromHea #photography

The following shots were taken in 2009 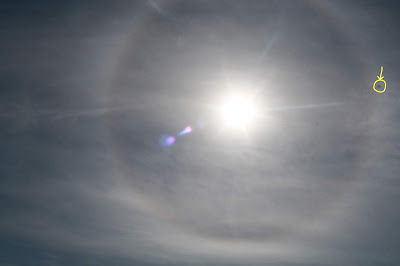 Original Size on Flickr : https://www.flickr.com/photos/raybanbro66/3374609244/sizes/o/
This phenomenon is known as a Sundog ....  it can appear as a dark halo around the Sun. But this sundog was unusual being that the halo was as black as outer space and warbled at one point.
I began shooting when I got to a strategic place I could shoot from , and by that time the halo had started lightening up .... hence the above image .
With the Sun shining through brightly , it wasn't till I got home & noticed the Unidentified Flying Object .  I had taken a series of shots and this was the only frame this object appeared in .
About 2 minutes later, a convoy of military type aircraft followed . I'm glad I took pics of these airplanes for scale comparison . The aircraft flew at a much lower altitude . Things can appear smaller at higher altitudes .
The UFO was at a much higher altitude . One could imagine how large it actually is compared to the military aircraft seen minutes later, and they appeared small as well flying at a much lower altitude
I'v uploaded high resolution images so you can zoom in closer.  You'll notice the appearance of the aircraft .... on each ... one aircraft wing appears smaller than the other . This could be from the sunlight (not being able to see one of the wings clearly)  It's odd that this happened with all three and not just one aircraft
This image should give you scale comparison of the size of the Sundog & military aircraft 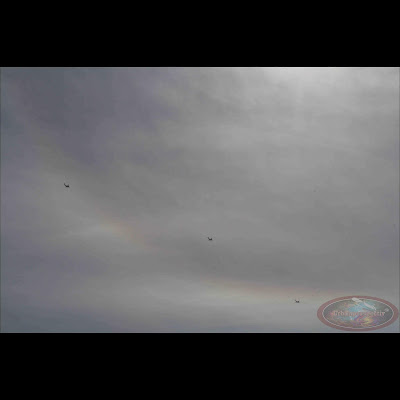 I began to realize after seeing the UFO , that "Heaven" is not a mythological place .
Jesus Christ of Nazareth (Yeshua) tells us in John 6:38 " ... for I have come down from Heaven, not to do my own will, but the will of Him who sent me"
John 8:23 He Said to them , "You are from below, I am from above; you are of this world, I am NOT of this world."
I was led by GOD to sketching out the phenomenon . I noted how it is written in Apocryphal by the Holy Prophet Isaiah .... this is a prophet that has 66 chapters of his own book in the Bible. His testimony about the angel that was sent to him and took him up into the heavens was redacted from Biblical canon. This information is found in the book of  The  Ascension of  Isaiah   The "angel"  didn't represent anything that the prophet had ever seen before.  Even in Biblical Scripture "angels" are depicted as men or they appear in some form which terrifies men.  I have not found any description in Biblical canon that says that "angels"  have wings on their back and play harps .  This is mortal man's interpretation of "angels" in artwork however  no description of such is found in the Bible.
It is in this book where we discover that Yeshua was seen descending through EACH of the seven Heavens. He assumed the form of those angels in each so they would not recognize Him. This was done on purpose . They would however see His Ascension through each of the Seven Heavens and then recognize Him
Jesus Christ of Nazareth in flesh blood & bone was seen being taken up into the clouds.
At one point during His existence on Earth in human flesh form .. He says to His disciples John 6 : 62
Then what if you were to see the Son of Man ascending to where he was before?
It is the Holy Prophet Isaiah that we learn because of his eyewitness testimony given of the Seven Heavens , and how Christ descended through each of them down to Earth and even into Sheol. He is the only eyewitness to the account of Christ coming down from Heaven , then assumes the form of a human baby.
In regular Biblical canon the Holy Prophet Isaiah is referred to by Christ Himself .  He references Isaiah by name on 2 or 3 occasions in Scripture. This tells me that anything coming from Isaiah is told in all truthfulness if Christ Himself references him.
This is why I chose in my sketch to reference this Apocryphal text by Isaiah :
The Ascension of Isaiah Chapter 6:13
And the angel who was sent to him (the vision) was NOT of this firmament , NOR was he from the angels of glory of this world, but he came from the Seventh Heaven. 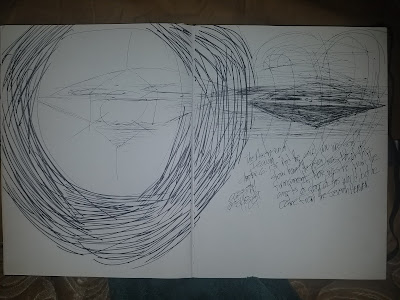 Angels may not always appear  how they look in artwork created by mortal men  . Matter of fact I can find no description in Biblical canon that says that angels have wings on their backs and play harps.
Hebrews 13:2 it says "Do not forget to show hospitality to strangers, for by so doing some people have shown hospitality to angels without knowing it." 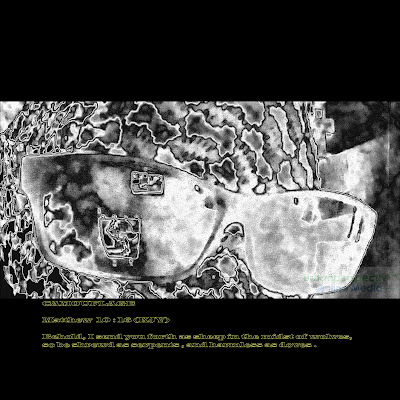 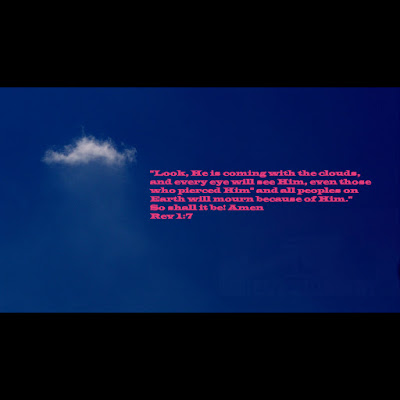 The Fermi Paradox in the scientific community refers to the apparent contradiction between the lack of evidence for and various high probability estimates of the existence of extraterrestrial civilizations elsewhere in the Milky Way galaxy. (wikipedia)

After shooting the prior Sundog images .... I say yes, there is high probability that ET's are here , but are trapped on Flat Earth ..... as evidenced by the Sundog photo w/UFO

The Book of Revelations is for a future time .... which is called NOW, being that it was written many ages ago. If Christ was seen in flesh form being taken up into the clouds, He said that He would return in the same fashion. In this day and age something physical, probably on a scale the human mind couldn't comprehend is going to return Him to Earth
The point I'm making is that one should focus on what is written in Biblical Scripture and not focus on artwork depictions of what they think the Second Coming will look like .  This artwork should not be worshiped, it is the words in Biblical Scripture that should be focused on for true worship
They were always looking for false testimony to accuse Yeshua (Jesus) of.
After relentless questioning , in which Yeshua kept silent , HE was asked by one of the High Priests , The high priest said to HIM, "I put you under Oath before the Living God, tell us if you are the Messiah, the SON of GOD.  Jesus responds (see the tweet below)


Yeshua has now put All Authorities & Eyes in the Unseen World on notice ... this inclds All Eyes on flat Earth be it "real" eyes or "symbolic" (as in hieroglyphics on pyramid walls) pic.twitter.com/5npRkTbYw5
— UrBanPerspectiV ™ (@urbanperspectiv) July 25, 2019


It is when I began to undertake my Spiritual journey that He led me to writing and sketching for His Glory .........